New Australian captain Steve Waugh had no hesitation in batting first on a Good Batting Wicket after wining the Toss in the 1st T20 at Harare.
Mark Waugh and Tom Moody set things up for the Australians with an opening stand of 64 in 6.4 overs, and the top 5 all enjoyed themselves as Australia posted 170/3 off 20 overs.
Mark Waugh's speedy half century was the highlight, the opener making 64 off 47 balls with 10 fours and 2 sixes. 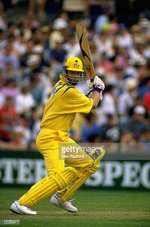 Mark Waugh's made a speedy half century

A poor start was probably the difference between victory and defeat for a plucky Zimbabwe side who fell 27 runs short.
Paul Reiffel found himself on a hattrick in the 3rd over on his debut in Australian colours as the score slipped to 8/2.
Dave Houghton and Andy Waller hit out to good effect and had a chance needing 10 per over over the final 60 before their dismissals ended their teams hopes of victory.
Craig McDermott impressed for the Australians with 3-21 but Man of the Match was Mark Waugh for the only half century of an entertaining game. 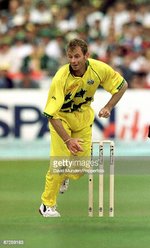 Paul Reiffel was on a hattrick on debut for Australia
Last edited: Aug 9, 2022

Solid win that, everyone did their part

Here is the schedule for the T20I series.

Please choose your XI for the following T20I match bearing in mind any injuries:

Please choose your XI for the following match bearing in mind any injuries.

Both Anwar and Imran out? Insane luck.
Moin actually has a T20 century as an opener, so i'd rather have him than Rambo to replace Anwar.

Winning the Toss and batting first on a Normal pitch in Hot and Sunny weather the home side got off to another poor start losing Campbell and Pycroft early again.
The Flower brothers added 54 in 6 overs with Grant carrying on to a well made half century.
At 127/4 off 16.0 overs Zimbabwe seemed set for a total of at least 160 but good death bowling by the Australians restricted them to 12/3 off the final 4 overs.
Tom Moody bowled well for the Australians, justifying his use with the ball ahead of the more experienced Waugh brothers. 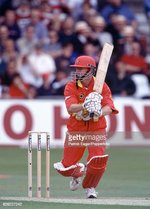 After fast medium bowling allrounder Gary Crocker took 3 wickets in the Power Play with some good use of the New Ball the match was in the balance.
Australian captain Steve Waugh shut the door on the Zimbabweans with a 32 ball unbeaten half century to set up a second win for the visitors.
Mark Waugh gave his side another fast start and Greg Matthews played an important innings after coming in with the match in the balance at 76/4.
Australia take a 2-0 lead in the 5 match series.

Australia won by 5 wickets
Man of the Match: S.R.Waugh 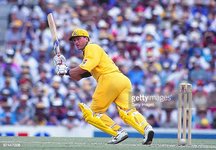 Australian captain Steve Waugh made an unbeaten half century off 32 balls
You must log in or register to reply here.