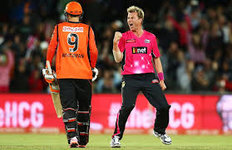 Brett Lee
The only you need in your team and I sure he will pull out the chainsaw a couple of times.

Adelaide: One of a few express bowlers to have played for Adelaide, this one was maybe the fastest, including the Wild Thing. Billy Stanlake!
Sydney Thunder: At this point I'm tempted to meme and pick Ahilen Beadle, but there are still some good picks, and this is one. In limited appearances he's been a great player for them. Also third quick in a row. Pat Cummins! 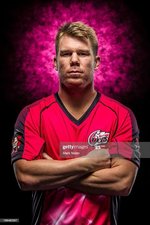 Yes, David Warner played for the Sixers so he joins and I was gonna take Pat Cummins who played one season at Sixers so I am not happy about that

FlynnR1 said:
I was gonna take Pat Cummins who played one season at Sixers
Click to expand...

Shane Warne comes into my team to partner Adam Zampa in the spin bowling department.

NePtuNe Gaming said:
uhm it was me before you, but no worries cant pick warne anyway
Click to expand...

Yeah sorry about that, may have accidentally tagged him for next rather than you

One of these I'm just going to get out of the way. Chris Lynn
The other was a teammate until this year, and it proved to be a masterplanned trade, but he was exceptional for the Heat in prior years: Matt Renshaw

Nw for the fillers:
Adelaide: Adelaide have been a bowling-led side in the last few years despite having a top order of Carey, Weatherald and Head. This bowler, one who has a Test hattrick, has reinvented himself as a canny death bowler with a BBL best of 5/16. Peter Siddle
Sydney Thunder: The Thunder only have one batsman at the moment, so here's another. This one isn't quite the star name like Chris Lynn or another one I plan on picking for them next up, but he's a consistent middle order batsman who has a cool head. Ben Rohrer

Dirk Nannes to send down thunder bolts along side Tait

George Bailey comes into my team as I absolutely loved the man's attitutde.

@FlynnR1
You must log in or register to reply here.