I would love to see both India and Pakistan in same group.

Fair to whom? Not the 2 Test nations that miss out, nor the other strong Associate teams.

CerealKiller said:
Fair to whom? Not the 2 Test nations that miss out, nor the other strong Associate teams.
Click to expand...

Fair to Star Sports cause they can show nine India matches.

Murtaza96 said:
I would love to see both India and Pakistan in same group.
Click to expand...

They will always be in the same group.

The Indo-Pak matches generates max revenue for the channel star & Yeah you and Everyone knows who!

Bigby Wolf said:
They will always be in the same group.

The Indo-Pak matches generates max revenue for the channel star & Yeah you and Everyone knows who!
Click to expand...

Stumbled upon on this. 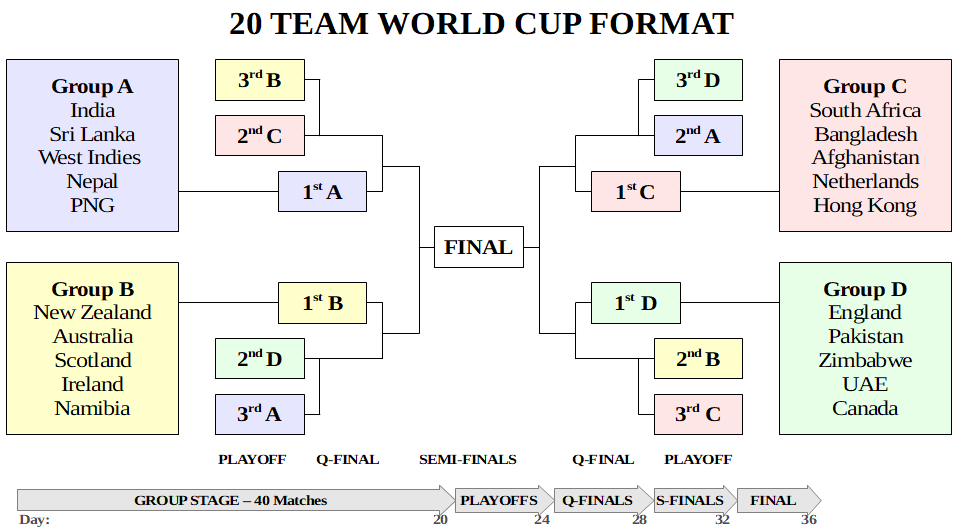 Untouchables_666 said:
My question though how India are hosting it?
Click to expand...

The problem with the 2019 forma being that the tournament became too long. It felt like a league as opposed to a World Cup. Also, if 2-3 teams got a good headstart, they simply ran away with the points and the gaps between the top and bottom rung teams grew at a rapid pace.

The 2011/ 2015 formats were far more exciting as it brought in the element of knockout games,- 6 KO as opposed to 2 (2019). With a 14 team tournament, this seems to be the most likely and exciting format. Some may argue that Super Sixes were a good addition (1999, 2003), but the fundamental concern of teams carrying forth points doesn't bode well for the future.

icyman said:
The problem with the 2019 format being that the tournament became too long.
Click to expand...

Rephrasing! It was boring.

It reminded me of the long drawn out Super8 stage of CWC2007. Little interest without KO games.

With the QF-SF-Final scenario, it becomes very interesting. A small slip-up can cost a team and that adds to the pressure. Makes for interesting viewing as well.

Parth D said:
Umm is it?

10 teams (round robin)
48 games in all including semis and final
Click to expand...

I assume @icyman meant it wasn't high stakes as it should be for a WC because there could be a large number of dead rubbers or meaningless games in the 2019 format. As I remarked once, we got to see the format be semi-interesting because the tournament favourites had a minor wobble. A lot of the other games were just not there and the tournament's perception has been saved by two very good semis and THAT, one of a kind final with a renewed English interest in cricket. I don't see that kind of a perfect storm happening ever again.
You must log in or register to reply here.