After messaging @ahmedleo414 concerning the unavailability of an eligible U at number 1, I managed to get an A as a replacement. But I'll leave my opener pick until the end. Got some bowlers to sort out.

People said that his debut was a fluke. They point out the fact that he only ever played a further 5 Tests after that debut and think that's the be-all end-all of it. But he had a very good FC record and played quite a few unofficial Tests where he was always among the wickets. Did he fall away? Yes, that can be a valid argument. But when you take 16 out of 20 wickets on your Test debut, that shadow hangs over you for your entire career. And that's just not fair. What makes it harder is that your bowling partner is Dennis Lillee. So now you've got to live up to both your stunning debut, and the skill of the guy at the other end. It's no wonder people think he was just a one-off fluke. Continuing health and fitness problems didn't help matters either, and a bright star fizzled out all too soon, back to the bank that was his day job.

And yet...the ability to swing the ball late and both ways. The hard work it required to bowl into the wind for long stretches of time (in that famous match he bowled 27.2 overs consecutively). When things were right, they were damn right. And I'll take that.

You can call him Bob. His name is Robert. But I know him as RAL Massie. A very good number 10. 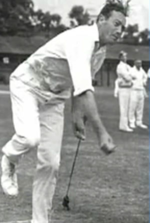 He was the first bowling superstar from South Africa, the first South African to 100 test wickets. Even though he didn't have good support from the other ends, he ended up becoming one of the most feared fast bowlers of his time. He was also awarded the Wisden Cricketer of the Year award in 1961.

Lance Gibbs will bat at 11 for me. He was the first spinner, and second bowler to 300 wickets. What makes this stat even more insane is that he played the role of the holding spinner in a team full of All Time Great pace bowlers. He was very accurate and had a ridiculous economy of 1.99. He generally pairs well with aggressive pacers, bowling long and economical spells to give nothing away to the opposing batsmen, and makes me think that he would synergize well with Allan Donald.

Number 5...an extremely important spot in a batting order. You'd often find one of your best batsmen in that slot. And the name that immediately sprang to mind was Shiv Chanderpaul. I mean, he'd be an awesome pick, considering that Clive Lloyd isn't eligible this time around. But then I went through the list again. And as much as it hurts me to not pick Shiv, I'm going to have to pass on him.

I'll take Michael Clarke at 5 instead. Why him over Shiv? The first is captaincy. Shiv was never that great as captain. Second is the carry-on ability. As many centuries as Shiv had, he never really went on. He only ever crossed 150 all of 5 times, whereas Clarke (with less centuries) passed 150 ten times. Then there's the addition of Clarke's occasional left-arm spin when you need a partnership broken. It's a tight race, but Clarke just edges out in front, so I'm going with him,

Imrul Kayes as unfortunately none of the Ians meet my requirement.

My next pick will be Lee Irvine

Because of the political situation in South Africa, Lee Irvine played only four Tests - but what a quartet it was. He played in South Africa's 4-0 demolition of Australia in 1969-70, their last series for 22 years. Irvine, the son of a Natal baseballer, was a punishing left-hander - he hit 26 sixes in his first season with Essex, in 1968 - who was just coming into his prime when he and South Africa were cut off: he made 102 in his last Test innings on his 26th birthday.

Even though Lee was a wicket keeper, I will have him play as a specialist batsman and let Brenden Taylor keep the gloves

@Murtaza96 is next, however he said he will be making his picks later as such @Ashutosh. you can continue

@Ashutosh. Has just over an hour to make his pick

After that @mohsin7827 can make his pick

Which one? There's two

ddrap14 said:
Which one? There's two
Click to expand...

Unfortunately JF does not have 30% criteria.
JR it is. 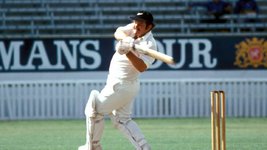 Jock Edwards was a short, stocky wicketkeeper who was a good enough batsman to make his Test debut (against Australia in 1976-77) as a specialist. He was brought back in 1977-78 as a wicketkeeper-bat and made 55 and 54 on his comeback against England at Auckland. That won him selection for the England tour in 1978. A more than handy keeper batsman, though didn't play many international matches but has a decent average in FC cricket. He usually chipped in with handy runs when team needed them the most.
But his most important trait that brings him to my team is that his name starts with E.

@Ashutosh. is next
You must log in or register to reply here.