Think the best choice for now is AB de Villiers who is versatile enough to bat anywhere in the middle order and will also give me a keeping option if needed. Gives a lot of flexibility to the team.
@Aislabie

I have an inkling about who Aislabie's gonna pick, let's see if I'm correct.

CerealKiller said:
I have an inkling about who Aislabie's gonna pick, let's see if I'm correct.
Click to expand...

If it's the same inkling, I'm going to be furious

CerealKiller said:
I have an inkling about who Aislabie's gonna pick, let's see if I'm correct.
Click to expand...

Everyone knows it. it's Chris Martin

Well, my first choice pick was going to be AB de Villiers to bat at five; he's just absurdly good at that role with a +226% VARP. No matter, I have another hugely valuable player to pick:

Where to start with Mike Procter? I guess with that video. In it, he takes four wickets in five balls en route to an astonishing six for 13. It is worth looking at who his victims were: Gordon Greenidge, Barry Richards, Trevor Jesty and John Rice in the space of five balls, then Michael Taylor and Bob Stephenson later on. There was no coming back for Hampshire, as they had fallen victim to one of the great fast bowling spells by a man who was also captain and number four batsman for Gloucestershire. For there is also the small matter of Procter's batting: often destructive, he would have comfortably made most teams as a batsman alone. He is one of three men to make six consecutive first-class centuries, and also boasts a Test bowling average of only 15. It is a shame - but a justified one - that he was never able to partake in ODI cricket due to South Africa's sporting isolation.

Aislabie said:
(PS - If anyone else wants in, then I can add you into the draft order - no biggie)
Click to expand...

Yes, you can. I shall add you to the draft order after I've had food
Y

Aislabie said:
Well, my first choice pick was going to be AB de Villiers to bat at five; he's just absurdly good at that role with a +226% VARP. No matter, I have another hugely valuable player to pick:
Click to expand...

So you say you would've left Viv Richards if you had the first pick?


CerealKiller said:
I have an inkling about who Aislabie's gonna pick, let's see if I'm correct.
Click to expand...

ddrap14 said:
If it's the same inkling, I'm going to be furious
Click to expand...

I mean we all know that by this point, that his first pick is always gonna be de Villiers or Procter...

Yash. said:
So you say you would've left Viv Richards if you had the first pick?
Click to expand...

Yep. He'd be either my second or third choice. Despite being an absolute monster, Viv's VARP as a top-order player (the role he'd be picked in) is +158% compared to AB's +227% in the middle order. Of course in an ideal world I'd have the pair of them. Once the players are all picked, ping me and I'll throw out an all-time VARP-based World XI, but I don't want to do that we've all had an equal-ish chance to pick the best players. 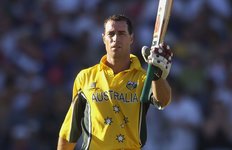 I will go for MICHAEL BEVAN.

The term 'finisher' was created and cemented by Michael Bevan - arguably among the greatest ODI batsmen of all time. For most people, the 50-overs format as it grew meant adventurous strokeplay and a lot of powerhitting. For Bevan, it was all about calculation, especially in run chases. His brain worked like a calculator as he broke down chases and constructed his innings brick by brick, eventually taking his side across the line from the most dangerous of situations. It wasn't as if Bevan didn't have the big shots in his kitty, it's just that he didn't prefer to go out blazing always. He preferred to put a value on his wicket every single time and also loved to take the game deep whenever he batted. The result was an extremely successful white-ball career for Australia with several experts calling him the 'greatest ODI player ever' due to his versatile skills.

Bevan also gives team the option to sneak in some overs with his left arm wrist spin bowling and was great in the field too.

Mittal2002 said:
I will go for MICHAEL BEVAN.
Click to expand...

God damn it, Bevan is gone.
You must log in or register to reply here.

Draft: The Alphabet Draft 3 - Revenge of the Consonants
2 3